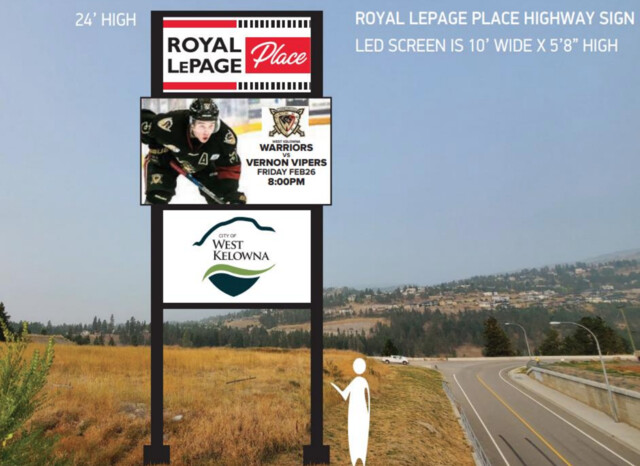 The West Kelowna Warriors are lobbying the city for a new sign on Highway 97 to promote Royal Lepage Place.

City council will discuss a request from the team on Tuesday for a 24-foot high sign at the corner of Hwy 97 and Bartley Road.

“It is quite common for municipal events facilities, like Royal Lepage Place, to have signage on nearby thoroughfares to increase the profile of the facility and promote the events held within,” the team said in its written request to the city.

“We believe a significant presence on Highway 97 will increase the awareness of the 1500-seat Royal Lepage Place, as well as provide the opportunity to communicate relevant messaging of upcoming community events and drive more patrons to the facility.”

The Warriors say many residents may not be aware of the amenities at Royal Lepage Place and the sign would improve awareness.

The sign would cost between $60,000 and $75,000. The Warriors says they are “open to exploring subsidizing a portion of these costs.”

“However, given the residual benefits for City and the naming rights partner, we are asking for financial support on this project.”