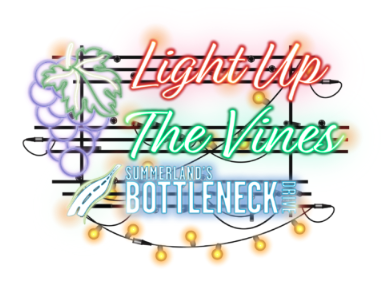 Summerland’s Bottleneck Drives 18 wineries, 3 cideries, brewery, and distillery will open their doors and turn on the holiday lights from 3 pm to 8 pm. Visitors can ‘Sip ‘n Shop’ their way along Bottleneck Drive and enjoy tastings, live music, holiday lights and special discounts on some of the region’s best wines, ciders, beer, and spirits. Just in time for holiday entertaining and gift-giving. Some of the tasting rooms will offer special treats like warm spiced cider or mulled wine, bonfires, complimentary snacks like crepes or bratwurst and DIY s’ mores to name a few.

Visitors also have a chance to win a prize package valued at over $500 by collecting five stamps with a ‘Light up the Vines’ passport. Available at participating tasting rooms along the way.

*Tasting fees may apply and include donations to Critteraid and the Summerland Food Bank. 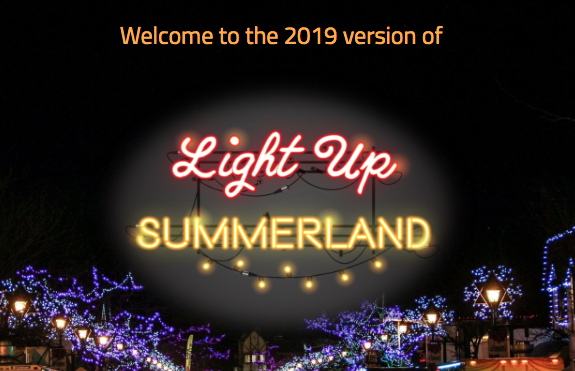 The Festival of Lights was conceived 32 years ago by 4 Summerland Businessmen, Jerry Hallquist, Art Sewell, Allan Fabbi and Bruce Hallquist under the umbrella of the Downtown Business Improvement Area of the day. It was originally started to help showcase the businesses of downtown Summerland and it certainly has over the years.

To get the event started, the committee sold strings of Christmas lights to every merchant/building owners in the downtown area, to decorate their buildings and approximately 25,000 lights were sold that first year. The District of Summerland became involved and decorated the light standards on the streets and other public buildings in the downtown area.

At the time, it was the only festival of its kind in the Okanagan and has been well attended every year!  Out of all the festivals that were done over the early years in downtown, no one had any idea that the Summerland Festival pf Lights would be the only one to survive 32 years later.  Festival of Lights was an instant success with an estimated 4,000 to 5,000 people in attendance for the first event.  It continues to thrive today and is not only a premier holiday event for Summerland, but for the whole Okanagan.