Hotels, restaurants and wineries saw a large jump up in bookings after BC moved into stage two of its reopening plan this week, welcoming recreational travel for the province and ending restrictions between health regions.

The provincial government announced on Monday that BC was transitioning to the next phase, effective Tuesday — the earliest date possible in.

“Since the COVID restrictions for the 16 of June have been lifted, we have experienced a lot of phone calls, which is exciting for us and the staff. We expect to be between 90 and 100 per cent full for all of July and August. We’re excited to see what’s going to be happening after the post COVID-era of the last 14 to 16 months for sure,” Billy Coles, co-owner and GM of Hotel Penticton said.

“We saw an immediate boost in bookings, the phone has been running off the hook for, I think a couple of days now. And it’s been really clear to the staff as well, we went from like, second gear to fifth gear, and literally in one day. So for the rest of the weekend, in fact, we have over 100 bookings, every service, so it’s busy,”Michael Ziff, the food and beverage manager for Poplar Grove said.

For Hillside Winery, bookings in their restaurant and wine tasting room have been coming in ‘fast and furious,’ according to the Director of food and beverage, Lisa Henderson.

“Both are looking very busy. Reservations are definitely recommended…We actually have had a few bigger groups that we just don’t have the room for. So lots of groups are out and about. And we’re kind of limiting how many we’re actually taking. So we have had to juggle a little bit, but we can usually get you in on a different evening,” she explained.

Businesses are having to turn people away due to being fully booked.

“I think Penticton has become a little bit of the palm springs of Canada, so many people are calling, especially on the weekends and the long weekends, looking for rooms. And unfortunately, we’re not even able to send them to other hotels because a lot of folks are just booked on those weekends,” Coles added.

And while some businesses are struggling with getting staff hired now that tourism season is back, others are prepped and ready to go.

“This is my ninth season here at Hillside. We have a very dedicated crew that’s actually knocking on my door in spring going, ‘When are we open?’ So it’s fantastic, they are ready…And it’s really, really nice to have those same faces come back every year,” Henderson said.

“We’re actually quite good for staff. I know it’s not easy, in lots of places. I’ve talked to a lot of colleagues in the industry, whether it be in the tasting room or restaurants and some people have been having some issues staffing up. Luckily, I did it in advance. I’m tight, but I’m there. If I had any less, it would be problematic,” Ziff explained.

The outlook for tourism is strong throughout the summer months, and even extending into fall.

“I joked with my wife today that I’ll probably see her in October. So I’m guessing it’s going to be right through till harvest too,” Ziff said.

Henderson added that everyone coming in is in a positive mood,

“I think everybody is really happy. The energy of everybody is almost that little bit of relief. And it’s kinda like getting back to normal. I think it feels good.” 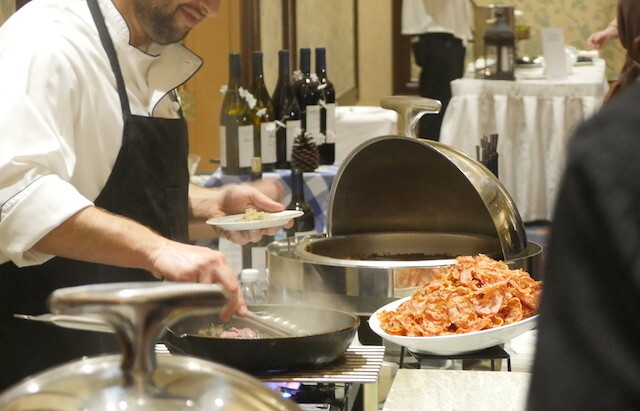 Housekeeping only on arrival and departure at hotels, more self-serve options at restaurants, and smaller menus.

These are some of the impacts visitors to Kelowna and other tourism destinations in the Thompson-Okanagan should brace for this summer.

“Businesses will be struggling to give you the service they want to give you,” said Ellen Walker-Matthews, Acting President and CEO of Thompson-Okanagan Tourism Association. “Just relax and enjoy the moment and understand it might be a little bit of a slower service than you expected in the past.”

“I think there’s been a fair amount of anxiety, especially in the last couple of weeks”, said Arun Subramanian of go2HR. The company helps recruit employees for the tourism industry in the Okanagan. “There’s a huge pent-up demand out there, so they’re going to start seeing visitors coming probably in droves, as the expectation goes, especially in some of the resorts.”

To attract workers, businesses are going to have to get creative.

“Are you offering flexibility for your workforce? You often create work schedules that are beneficial to the business or the employer, but are you creating work schedules that can be a little more beneficial to your employees?” asked Subramanian. “Sometimes it may mean using two employees for one job because it will help you attract people who can work a certain number of hours.”

He also suggests restaurants consider more self-serve options and reducing their menus to take pressure off the kitchen.

Walker-Matthews advises people to be prepared for reduced service. “You might not get housekeeping every day when you’re travelling this year, because it just might not be possible.

The shortages are right across the board. “It’s front-desk, housekeeping, cooks, all the back-of-the-house jobs,” she said. “As well as when we talk to our wine industry, they’re having difficulty in the wine centres getting people to do tasting rooms.”