We are a volunteer society, and all products sold by our vendors are made local and grown local, so you can buy local. This includes a variety of artisan crafts, local fruits and vegetables, baked goods and wine/cider/beer/spirits.

Every week we feature live music from local or visiting musicians.

To bring the Vinstitute to you, we have partnered with Oliver Osoyoos Wine Country to produce a monthly Virtual Vinstitute session that will explore different topics in wine as well as feature a spotlight on some of the magnificent wines of our region.

The session will air on Facebook Live on the Oliver Osoyoos Wine Country page. 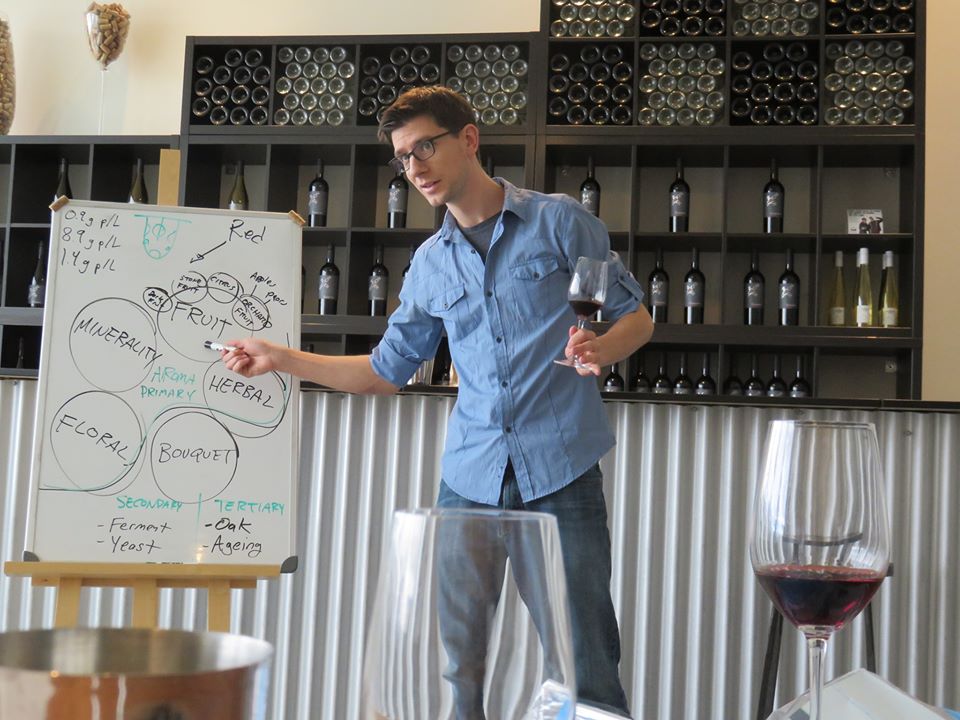 Breathe the fresh air. Soak in the natural light. Connect with nature. 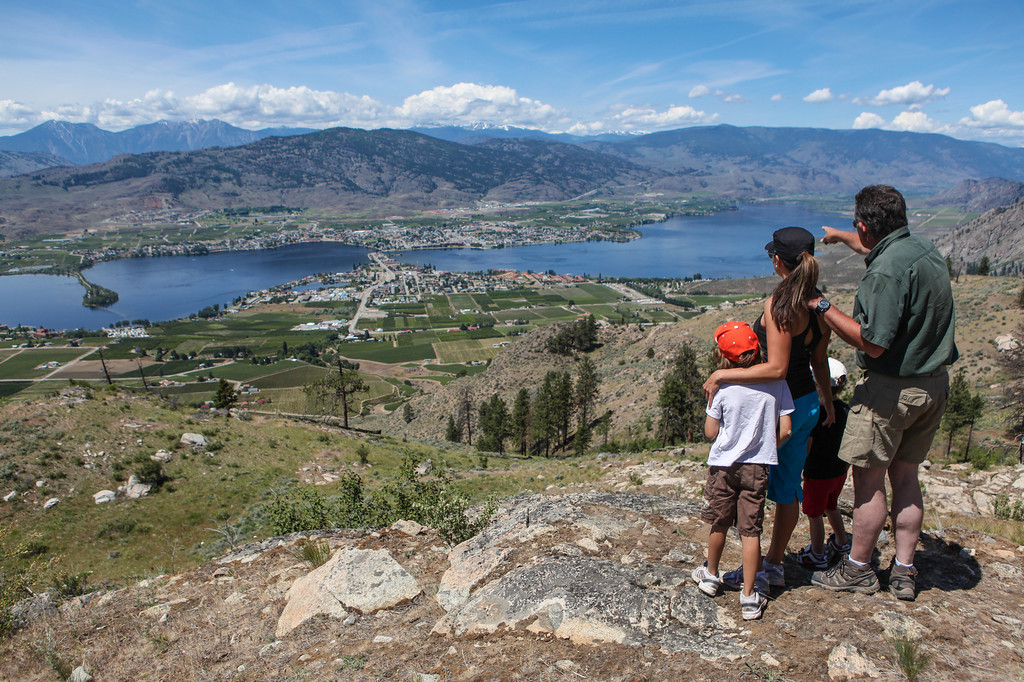 Hiking the hills around Osoyoos is a major pastime for locals and visitors alike. Around Osoyoos, for example, you’ll find a terrain that varies from easy strolls along the shoreline and along the Okanagan River to more strenuous climbs on nearby Mount Kobau where you’ll find yourself atop a rampart that separates two ancient river valleys.

It’s worth the hike to find yourself among wildflowers that bloom on the slopes between the sage and pine, looking down on orchards, vineyards, wetlands, and grasslands. And at night, stargazers are in their element. Drive up the mountain, set up your telescope (if you have one) and be dazzled by the brilliance of the stars.

Several trails throughout the area provide interpretive signage or guided tours with opportunities for bird watching and wildlife watching, with panoramic views. And, if you’re a birder, bring your binoculars for seeing some of the 300 species found throughout the Okanagan – two-thirds of which breed in our area. The best hot spot to viewing is at South Okanagan Grasslands Protected Area around Kilpoola and Blue Lakes, the Osoyoos Oxbows wetlands and the Golden Mile Trail north of Osoyoos. Among the species, depending on which habitat you’re at, are great blue herons, woodpeckers, raptors, warblers, white tailed ptarmigan and the boreal chickadee.

Cyclists come to us for high road, back road, off road, mountain and BMX biking adventures. Many top-end athletes come to us for endurance biking, which you’ll find in several locations. One of the most popular – and difficult – is the road up Anarchist Mountain, a straight up the mountain test that puts the heart rate up and muscles straining. Once you get to the top, you’ll have one of the most spectacular views in the entire region.

More gentle cycle tours can be found on Black Sage Road and the International Hike and Bike Trail. Take the Black Sage Road, north of Osoyoos, and pass dozens of small and large wineries including Desert Hills Estate, Burrowing Owl, Black Hills Estate and Church and State Winery, among others. Stop in at one or two, have lunch and experience this exceptional industry. The 18 km (10mi) and generally flat International Hike and Bike Trail borders the Okanagan River Channel and like the Black Sage Road route, passes wineries and fruit stands. 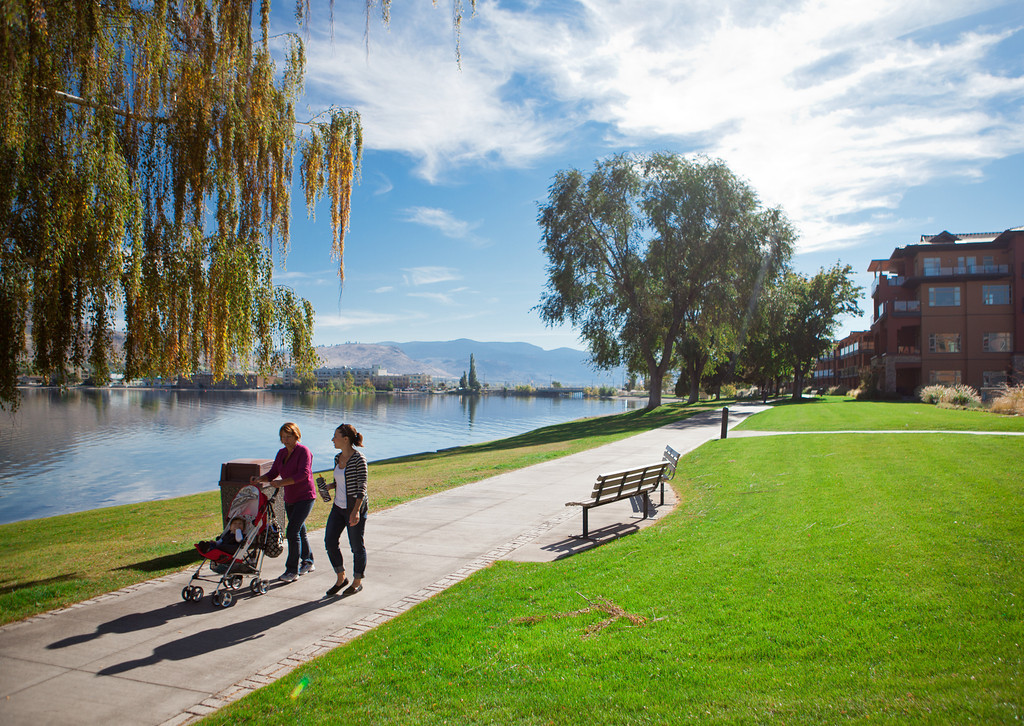 Lakeshore Drive Pathway
This paved pathway starts at the public beach access where the road makes a sharp left turn, then runs parallel to the roadway and next to the waterfront. This is an easy familiy biking route for those staying in RV campgrounds along Lakeshore Drive.

Irrigation Canal Walkway
This popular 12 kilometer round trip trail is accessed on 62nd Avenue just north of Osoyoos Secondary School. Parking is available around the corner adjacent to the trail sign. The walkway can also be accessed from the Visitor Centre parking lot. This trail follows an abandoned section of the irrigation canal, once the lifeline of Osoyoos that opened up the area for the fruit industry. Flat with hard surfaces, ideal for easy strolls and strollers. 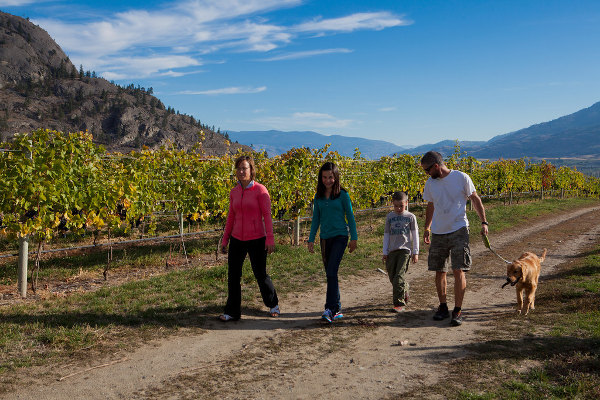 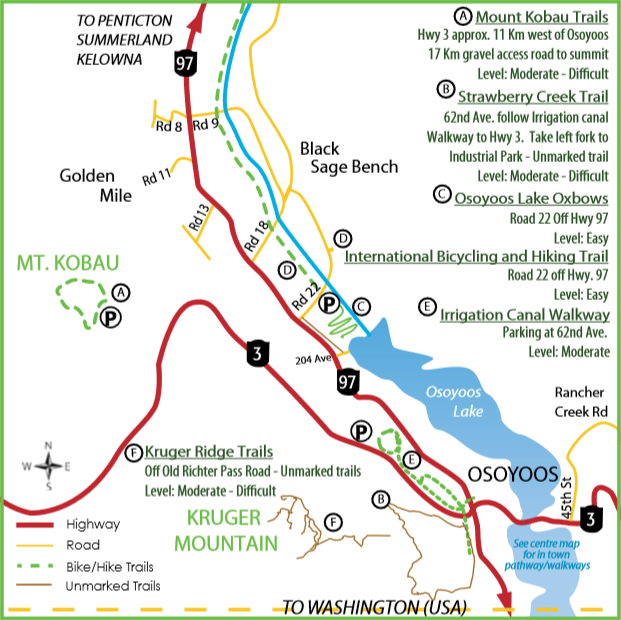 International Bike and Hike Trail
Located at the north end of Osoyoos Lake and running parallel to the Okanagan River channel, this 18.4 kilometer trail is perfect for biking between wineries, fruit stands and farms. The parking lot is accessed on Road 22 off Highway 97, eight kilometers north of Osoyoos.

Osoyoos Lake Oxbows
Recently restored, the oxbows at the north end of Osoyoos Lake are ideal for watching both migratory and resident birds. Access at the same parking area as for the International Hiking and Biking Trail but head south instead of north. Located next to and as part of the Haynes Lease Ecological Reserve.

Mount Kobau Trail Network
The five kilometer Testalinden Trail has oustanding views of the Similkameen and Okanagan Valleys. Access via Highway 3 approximately 11 kilometers west of Osoyoos, then 11 kilometers along the gravel/dirt access road (not suitable for low clearance vehicles) which takes you within one kilometer of Mt. Kobau’s summit. Follow the trail to the forestry lookout for a great view of the valleys and mountains.

Unmarked Trails
Please note that the Kruger Ridge and Strawberry Creek trails are unmarked.  Please see the map above for locations. Chef McDonald and the culinary team have created an incredible menu for two for Valentine’s Day. The Firehall Brewery is privileged to offer limited tickets to this incredible musician on Thursday, Jan 30th at $20 per person. Doors at 6:30 PM, We are licensed. We are the absolute best space and intimate atmosphere for your maximum immersion experience into music of this calibre. We are at 6077, Main St. in Oliver. 778-439-2337. Tickets will fly quick for this one.!!! Get a move on! Get yours!
…at The Brewery or https://www.firehallbrewery.com/event-details/ryan-mcmahon-concert

As a co-founder and arguably the most ‘out front’ of the 3 very ‘out front’ guys of Lion Bear Fox, Ryan fills not only the stage but the whole house wherever he plays. He has released five full-length albums, and seen his music licensed nationally and abroad. He has garnered 3 wins (Male Vocalist, Record & Artist of the Year) at the Vancouver Island Music Awards.

In April of 2014, Showtime’s original series, “Californication” featured the single “I’ll Be Damned,” a song that was included on “Put Me Back Together,” which came out April of ’15. On September 8th, 2017, Ryan released an EP titled “Song Shelter Recordings,” created entirely at his home studio in Ladysmith, BC and Legendary Canadian TV/Radio personality Terry David Mulligan may have summed up Ryan best: “The complete package. Singer. Songwriter. Performer. Troublemaker. Passionate human being. For me… priceless.” Exploring special topics in BC wine, Vintrigue classes offer experienced tasters or enthusiastic new learners a deeper dive into the many stylistic variations in wine. Big Time talent coming to Oliver….TV Comedy star and Canada’s funniest man, Tim Nutt and his crew are coming to town to dig you out of your frozen January blues. The Oliver Theatre and the Firehall Brewery are co-hosting this killer show presented by OM Oliver Music & Entertainment on Thursday January 16th at The Oliver Theatre…this is huge!!!

Tim Nutt doesn’t just tell jokes—he tells funny stories with jokes and has been getting away with it for just over 20 years. He pushes comedy to explosive new levels and dimensions. Expertly exploring the hilarity in everyday life, he delights audiences with his bizarre concepts and twisted viewpoints, combining one-liners and crafty storytelling.

Nutt has performed at comedy festivals all over the world, including the Edinburgh Comedy Festival, Just For Laughs in Montreal, the Halifax Comedy Festival, and the Winnipeg Comedy Festival. He’s often described as a consummate storyteller and entertainer, not unlike his comedy heroes, Billy Connolly and George Carlin.

Alberta’s top comic, Jordan Strauss destroyed the competition to take 1st place at the Calgary Funny Fest. He’s been all over TV Comedy Shows and now he is coming for you, Oliver!

Andrew Crone has a cutting comic wit that is unparalleled and unrelenting. He has verbally sliced and diced his way across Western Canada, alongside some of the biggest touring acts in the country. Andrew has cleaned up at Comedy festivals and appeared multiple times on TV Comedy shows.

Tickets are only $20 and available at The Firehall Brewery, The Oliver Theatre box office or online at firehallbrewery.com/comedy
Thursday January 16th. Doors at 7:00: laughing your frozen @#* off soon to follow. Event will be licensed with some great appies you can choke down while laughing.

Taste our wines like you’ve never tasted them before in this unique event.

This NEW Blind Tasting experience is a fun way to explore the wines we make at Black Hills Estate Winery and learn about the art of determining classic wine styles. Plus, if you guess all 7 of the wines we pour that evening, you will win a bottle of one of our delicious wines!

A light charcuterie platter will accompany the wine tasting. Tickets are only $50 + tax, limited to 20 seats. Put your tasting skills to the test! Take in the magic of a Baldy Mt. sunrise. Ride up the Eagle Chair at 7:00am and have Breakfast at 6,965 feet as the sun comes over the horizon and lights up Baldy.

Delicious breakfast wraps, coffee, hot chocolate, and early access to the lifts for skiing from 7:00am to 9:00am.

Meet at the base of the Eagle chair for 7:00am.